ILEC hosted a domestic forum in Otsu, Japan, targeting government officials and researchers engaged in lake basin management. The two-day forum was attended by nearly thirty experts and officials nation-wide, from the Ministry of Environment, local government authorities and academic institutions. On the first day, a variety of presentations, regardless of the size and legal status of lakes, were made by representatives from Lakes Biwa (Shiga), Kasumigaura (Ibaraki), Mikata-goko (Fukui) Kahoku-gata (Ishikawa), Inawashiro (Fukushima), and Sanaru (Shizuoka). They were followed by discussions among participants which continued to the following day. The forum was concluded with a field trip around the southern part of Lake Biwa, and positive comments were made from participants, suggesting the continued organization of this event. (January 26-27th, 2016). 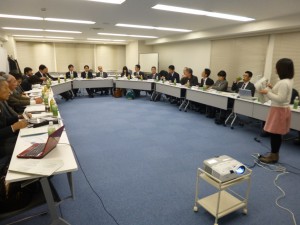