ILEC was contracted by Shiga Prefectural Government to carry out the FY2018 Ramsar Biwa Kids Ambassador Project. In this year, eight Ambassadors will learn about Lake Biwa and the local culinary culture in a series of preparatory workshops to make a presentation in the 17th World Lake Conference (Lake Kasumigaura, Ibaraki, Japan 2018) to be held in October.

On June 23rd, the ambassadors visited the Suhara Fish Cradle Rice Paddies to observe living creatures in the waterway, and listened to a talk about the system of rice paddies by the rice paddy manager.
After that, they cooked two kinds of local rice cakes called “Imotsubushi” and “Kofukumame” by using rice produced with Lake Biwa water, and learned about rice culinary culture from a professor of Shiga Junior College.
They enjoyed studying the relationship between Lake Biwa, rice paddies and living creatures. 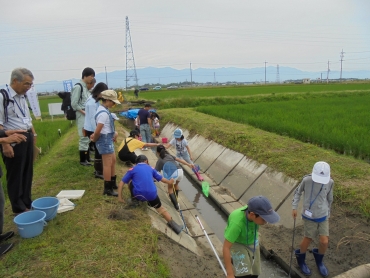 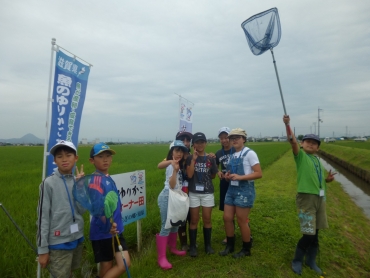